The first in our series of monographs, from our guild member Loddfáfnir articulating the path of the modern Hyperborean adept and Northern Magus. Those seeking genuine initiatory structure are often bewildered in the maze of New Age platitudes and fluff or of the deliberate distortions of the Northern Path. Other extremes seek to fill the vacuum of genuine initiation with bravado, posturing, role playing, adolescent rebellion all playing at being macho, sinister or outlaws. This is not for those that fetishize aspects of the path, but for the full spectrum adept skilled in the forest and the fields, both farm and battle. This is not a document for those seeking to dabble in the Northern Traditions, or to have their projections or neuroses validated and coddled. Likewise, there is no intentional provocation or shock, only a measured but intense reflection on decades of seeking authentic alchemical knowledge and occult lore of the Indo-European traditions. This is certainly not a writing for those that wish to remain comfortable in their worldview, their skillsets, their health, personal autonomy and self-accountability. This is a book about becoming an elite individual as well as forming an elite tribal network, with a basis in alchemy, theurgy, permaculture, bushcrafting, and related disciplines. This is a general volume and should be seen as a per-requisite to the further issues. 32 pages

This is the next issue in our series of occult traditions and folklore of the Northern Tradition. This monograph is the shadow side of the first volume, and builds upon the basic structure towards self-mastery in the context of ancestral traditions of Northern Europe. Unimpressed by much of the available texts reconstructing this tradition, Oddrún has emerged from the reclusive depths of the woods to impart some of the gems of native forest traditions as a means for true self-initiation. So many texts are New Age platitudes, hodgepodge of Victorian era pop-occultism or relics of political extremists, some from pretender outlaws and the perpetual adolescent, or disciples of intelligence agents posing as occult masters (for instance, Dr. John Dee, Crowley, Dr. Aquino to name just three). One must truly question their worldview, their loyalties, their art, their lifestyle and known affiliations and see if they advance the Old Ways and the way of our folk or if they advance the deranged plans of the deep state. We can see these plans in the reverse alchemy of social engineering, orchestrated debt/wage slavery, ecological destruction, incessant war, monoculture of food, race, etc. into deep biology, transhumanist nightmares. Our revolt is not political but in strengthening the self, the family and the tribe. Clearly anyone who does even a little research can see history is not the simply linear progression of organic events, but rather is largely orchestrated and manipulated, a careful construct, nearly perfect in its enslaving deceptions. (Those seeking deeper context on this occult war can read the first volume of Magus, or if you are looking for more mainstream sources to validate these claims, read Tragedy and Hope by Carroll Quigley, Fire in the Minds of Men: Origins of the Revolutionary Faith by James H. Billington, historian and Librarian of Congress.)

Many of these have produced some truly dismal writings on magic, runes and the Northern tradition, replacing one set of distortions for another, trusting impersonal systems beholden to non-ancestral gods and entities, masters, holy books in the same slave religions of the desert. These are the warped traditions of the Nazarene or Egyptian doctrines, sprinkling in thelema, wicca/kabbalah, gimoires or new age doctrines or genuine occult diplomas and mandates from ancient gods as in the Temple of Set. These systems all have in common hierarchies, holy books, prophets, commentaries by their elect, ritual grades given by others, in the masonic templates of self-aggrandizing titles and false accomplishments. Many are set up to personality profile useful idiots for true psychopaths, or as extras in hedonistic rebellion, virtual gangs with rebel merchandise to show how disdainful they are to society or their childhood.

It is our sincere hope to present concise, dynamic and useful monographs and remaining anonymous. Our goal is to dissolve the anti-tradition’s dross and distill the essence of the way forward towards true self mastery. We take the time to articulate all of this for those reading, because so many cling to their cherished heroes or occult authors that they learned from their favorite anti-establishment rockstars (most of whom are knighted.) One can not pose as rebellious and validate these parasitic elites. Rather these deathstyles and death music of psychological poison have devastated the family and left many infected, addicted, weak, neurotic or dead.

This is a monograph for those that have grown weary of the second hand notions of these corrupted and debased traditions and charlatans. This is not for those lazy or wanting to be spoon-fed a system. It is a philosophical skeleton key to the locked worlds firewalled by these counter-traditions in the occult wars that have nearly eclipsed the true indigenous traditions of old Europe. It is a steady invocation to a true nature-based initiation free from the ossified crypto-masonic and Gardnerian all-too-human debasements of the path of Self. Our surviving lore retains all that is needed to reconstruct a viable, powerful and transforming Northern Tradition without the taints of these pretenders, their parasitic traditions of subservience, slave mentality, and ‘trust me’ priestly authority. We do not need their Talmud, Torah, Koran, Book of the Law, or any of this verbal tripe and hogwash. Our advice to you, if you buy this monograph or not, is to truly stop being lazy and read the lore of the ancestors and pay attention to the deep initiatory structure revealed within. Purge any occult writers using kabbalaistic/masonic distortions and these alien psycho-spiritual parasites, they are truly vampyric and always require prerequisite surrender of autonomy to some external authority. They are elitist but not based on merit or achievement, using the syndrome of the secret to constantly defer the truth to the level, the next revelation, the next initiation which they control. Some of these traditions were once genuine but were infiltrated and either infected or rendered meaningless.

We have spent a lifetime studying folklore and the occult traditions of the world, especially the Indo-European mystery/alchemical traditions and indigenous European shamanism. It is our goal to allow our guild members, teachers, allies to publish these short but powerful catalysts to articulate some of the ways to begin blazing ones own trail back into the Forest Traditions. 24 pages.

A concentrated dose of the ecstatic wisdom, distilled again into the most potent and direct statements on the Great Work. Some might find some medicinal insights into curing the deep rotting sickness.

Topics include the European ancient mystery schools, plant and endogenous tryptamines, and synthetic versus organic “entheogens” in the context of the occult wars. An exploration on the Nature of the Gods and entities follows, and further notes on self-initiation. Finally some miscellanea of runick magic, assault sorcery, and various related topics from the Lore. We thank you for supporting our mission. 48 pages.

This issue of Magus is a discussion of entheogenic plants of the Indo-European tradition, with a focus on the indigenous ancient initiatory heritage of the North. More than simply listing the evidence and folklore of the various herbs and fungi, it is a manual of shamanic technology, warrior/hunter training, and regaining the master narrative of the Hyperborean world view through gnosis of the Polar tradition. This is a concise reassertion of the Northern visionary initiation away from the anti-tradition and false narratives of synthetic psychedelics and the manufactured counter-culture. The root cause of so many diseases stem from the alienation from functional and initiatory interpretations of the lore. This is the spiritual sickness of ancestral amnesia, regained through the shamanic use of one’s ancestral plants within the Tradition. This is a guide for those that would aim their focus to the Great Work of the Magus as expressed in the acquisition of power and an energy in the self-initiation of plant Northern plant shamanic training. This is combined with the deep research of ancestral knowledge in the gnostic tasting and remembering of primordial memories. These two forces encompass a balanced pursuit of the Mysteries with the warrior’s discipline, strength and martial prowess to protect and preserve these traditions.

We thank you all so much for supporting these works and side projects. All proceeds are invested in rare texts for future issues, and we distill our intense research to help the true seekers to awaken and remember the true noble, honorable and wise path of the Northern Tradition. As we note, the Viking Age was the dusk of the pagan era, the last gasp, the true indigenous shamanic and magical lore date back to the purely subtle spiritual Hyperborean Mystery traditions. These cults of the Northern wind brought the specific healing and visionary enthusiastic wisdom to the Mystery centers all over Europe. These were violently suppressed, driven under ground where they are encoded in our memories. The visionary rites awaken these dormant truths, as we drink and taste the gnosis or knowledge of the path, the remembrance of the sacred meaning of life as a heroic and initiatory quest. The ancestors left the skeleton keys to these long locked doors to the past in the lore, in their art and mythos. 60 pages.

The lore contains the lost unified wisdom that only survives in the scattered, distorted fragments. This was a lore of initiation into the astrotheology and cosmology that was as above and so below to the entheogenic and chthonic Mysteries. In our forensic mythological research, we have searched for the deep lore of the Yule season and the secrets of the Great Winter. We present our research to those seeking to study the Hyperborean lore that birthed the legacy cultures that retained the fragments of a greater wisdom. This is for those remembering the old ways in their own personal traditions. This is for those that are seeking self initaiton in the poetic truths of their ancestors. The broad scope of Winter myths shows the diversity of interpreting sacred truths. We must use the lore as a map to blaze new trails through the wilderness in our return back home.

Support our work and research with the latest winter issue of Magus. This issue is of the winter shamanic rites and timing of old Hyperborean rites and speculations on the timing of Odin’s nine night sacrifice. Other topics include the entheogenic origins of Yule, the wild hunt and evolving traditions of the Winter Solstice. Issue 5 includes sections including the Dark Ages, Winter Rites, Ice Shamans and the Occult Wars. 52 pages. 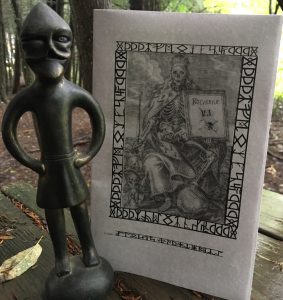 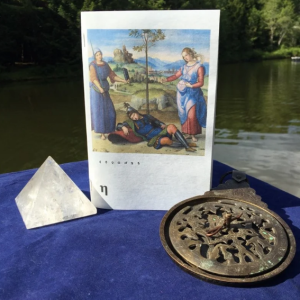 Eta: An Alchemical Dossier of the Hebdomad V.1 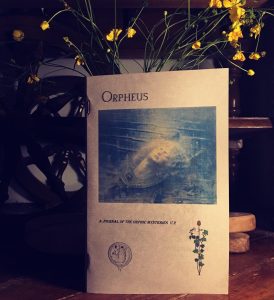 Orpheus: A Journal of the Orphic Mysteries V.2